How you doing ladies? Two weeks ago I had a fantastic
weekend! I spent my Saturday with my man. We’ve had a really lovely lunch and then he took me to
Ikea and even let me buy some small bits and bobs. Rare occasion, we usually
argue about me spending a lot of money (no idea why guys do that!). Nevertheless, Sunday was the icing on the cake of my
weekend. I had a bit of lie in, followed by my favourite scrambled eggs with
salmon as a brunch and then off I went to a #currysintrojuicing bloggers event. And if you follow me on Instagram (Modelily) or Twitter (@Mode_Lily), you would have heard tons about it already! 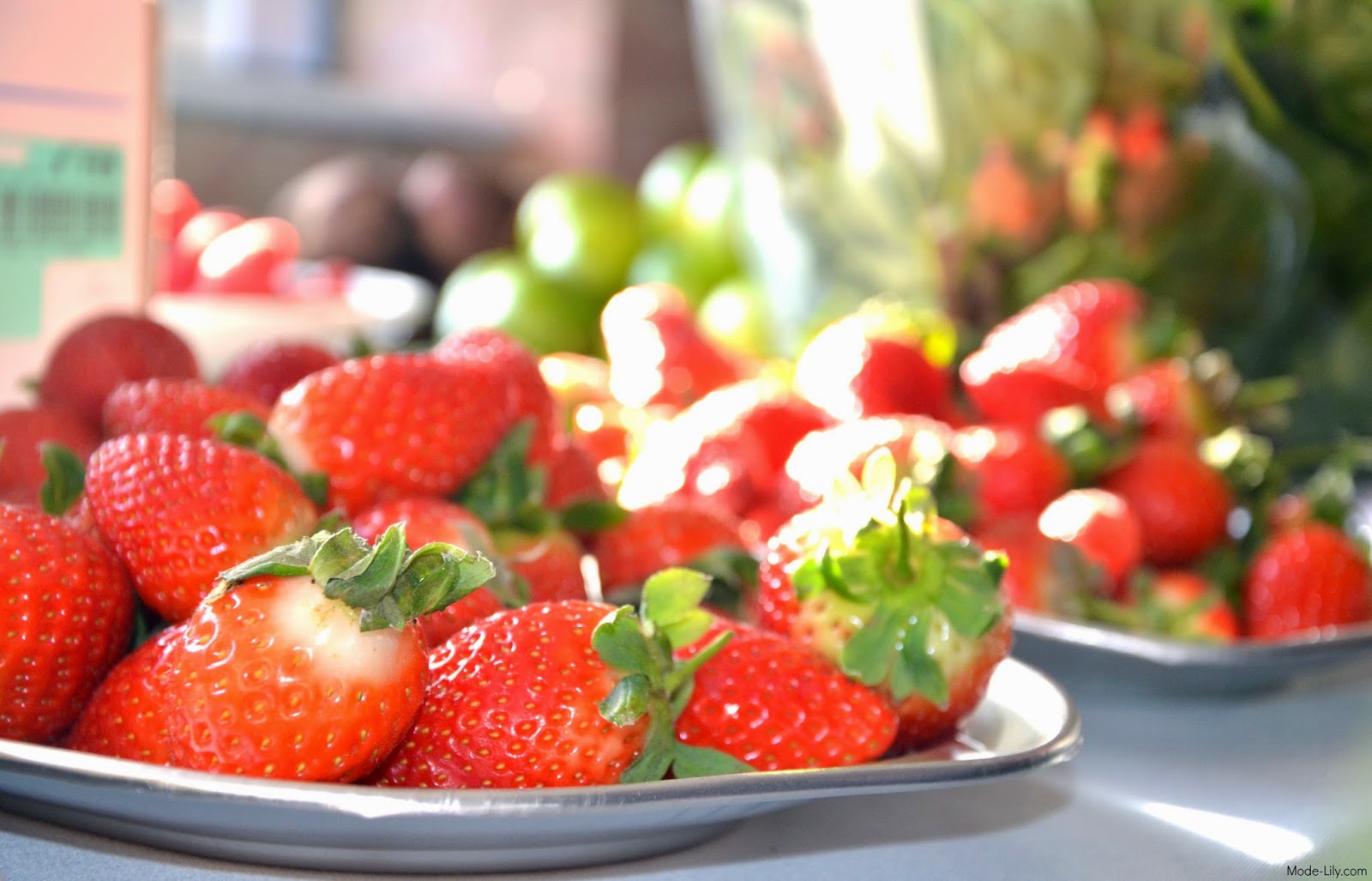 I have met quite a lot of the faces I know from other
bloggers events but I have to say I’ve actually seen quite a few new faces. There were five stations with each station given its
particular purpose. Similarly, we were all divided into five groups, taking our
turns at each station. My group has started at the “Make your own juice”
station. Guys from Joe bloggers and Currys (have a read of their post on the event!) made sure that the place was
very well stocked with tons of healthy fruits, vegetables, my all-time favourite coconut water and some
healthy yogurts. Using Philips juicer we could have come up with all sorts of tasty
and healthy juice recipes. Me and Maria from Fashion Infatuation made tastylicious juice using
raspberries, strawberries, lemon and coconut water. I’m certainly going to incorporate it into my favourite juice recipes as it was very light and refreshing. I’m a
healthy juice fanatic and I can’t imagine hot summer day without an apple and
carrot juice with plenty of ice in and some peppermint leaves. Hence I tried to
do more experimenting with flavours rather than sticking to flavours I already know. Also, a big coincidence, I own Philips juicer myself. 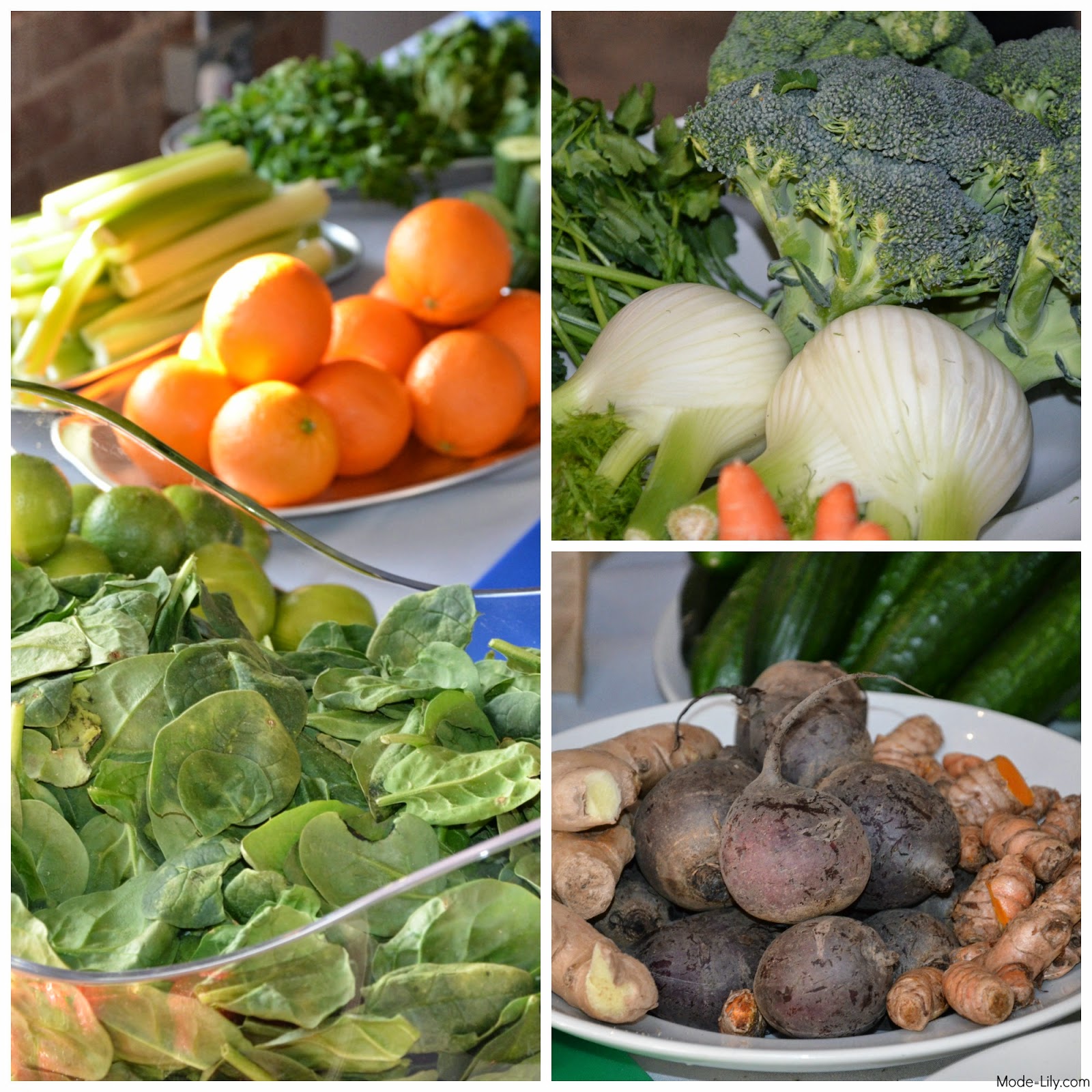 Our next stop was ‘Healthy soup station’. We could have
picked from two gourmet soups: truffle and mushroom or chicken and lemongrass soup. I was very
tempted to try the truffle one (as I don’t think I’ve ever had one) but the
chicken one won and I didn’t regret. It was tasty with a zing to it.

The following was a ‘Nutrition advice station’ where we were reminded that
healthy juice doesn’t have to consist of fruit and vegetables only. There are
actually tons of additional nutritients (such as chia seeds and wheat powders) that can bring your juices to another healthier level. It was all explained by a lovely Shakela from Nutrishan. So far I’ve used
chlorella powder as well as matte (a type of green tea) powder but now I’m on a mission to
stock up on some more healthy ingredients. It’s time to get creative I believe! 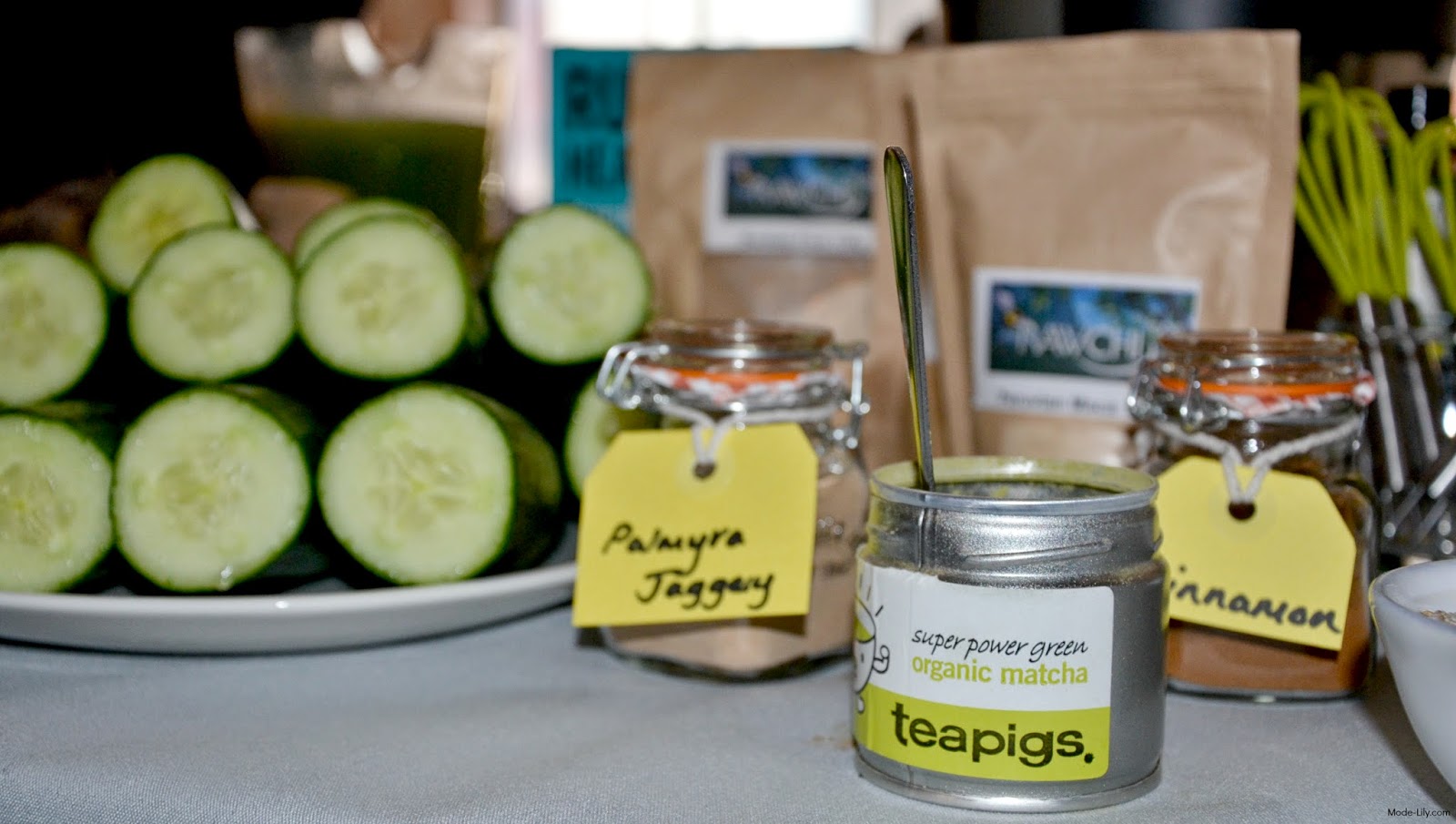 We also had a chance to witness making of ‘moctails’ from
juices and I swear that by that time, the amount of juices I have had was coming out of my
ears!! We were all seriously over juiced but still somehow craving more! We were proved that juicing can also be fun as we had some beetroot shots! 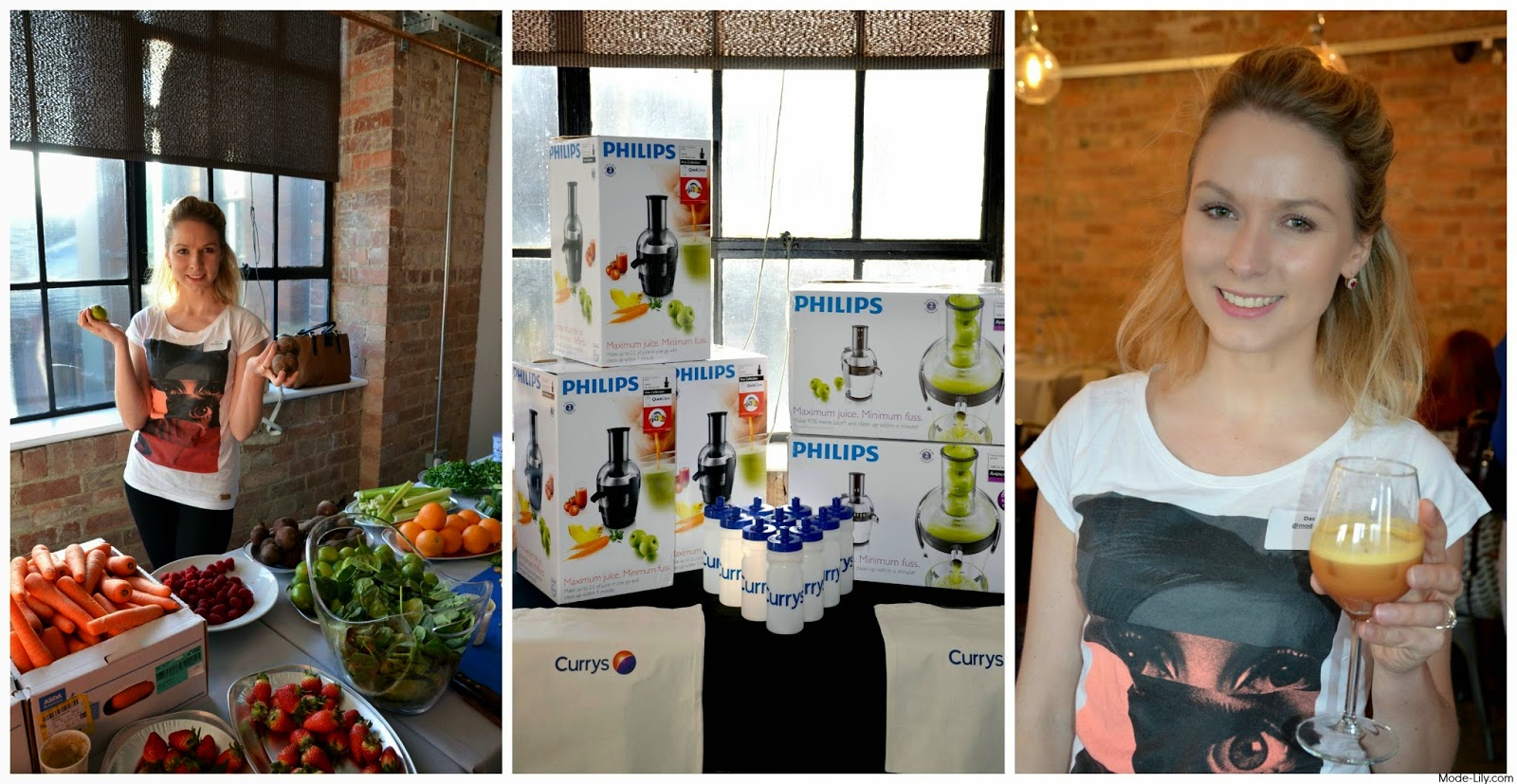 Finally, the one thing I was looking for the most, we got a
chance to try some yoga. I’ve been wanting to give it a go for some time now so
I was excited. The type of yoga we got to do was called ‘Rocket Yoga’ by Amanda from Yoga Elementz. This is
a bit faster than the ‘normal yoga’, I guess. Even though I’ve enjoyed it, I
have to admit, I would prefer something more slow, something where I can learn
to relax and leave the everyday stress behind me. I’ve already looked into some
classes in Leeds and I’m hoping to start soon. 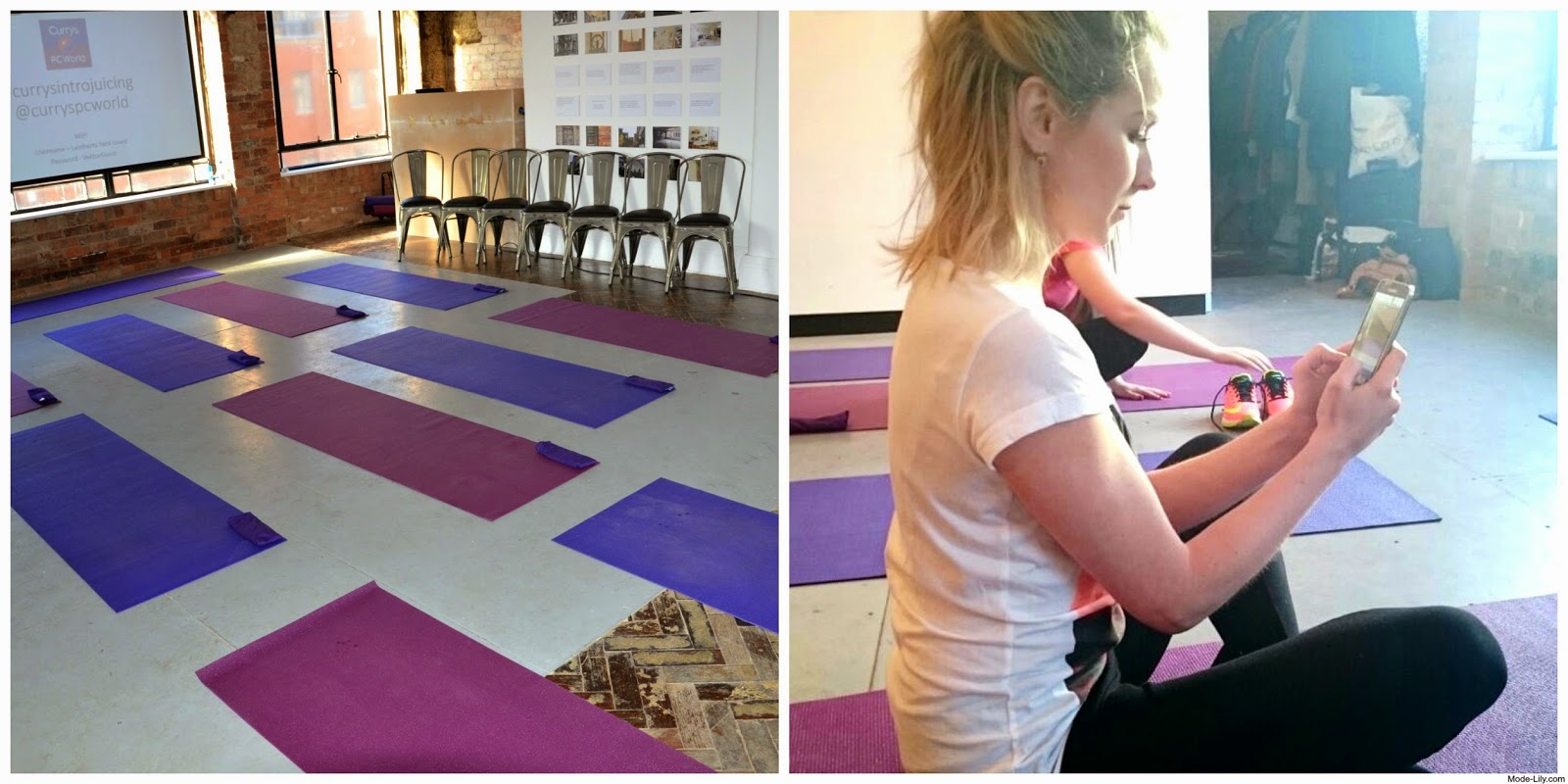 I had to dust off my trainers as I’ve packed those into one of my boxes 3 months
ago when we were moving out and I haven’t had a chance to take them out
since. It took me about an hour to track the right box down! I felt like
a right
scavenger, rummaging furiously in a garage. I’ve also been
contemplating
about doing a yoga or Pilates for some time now so I was pretty excited about
trying it out. The joy of my work is that it can get quite (stressed) hectic
and I feel I should look after myself more. 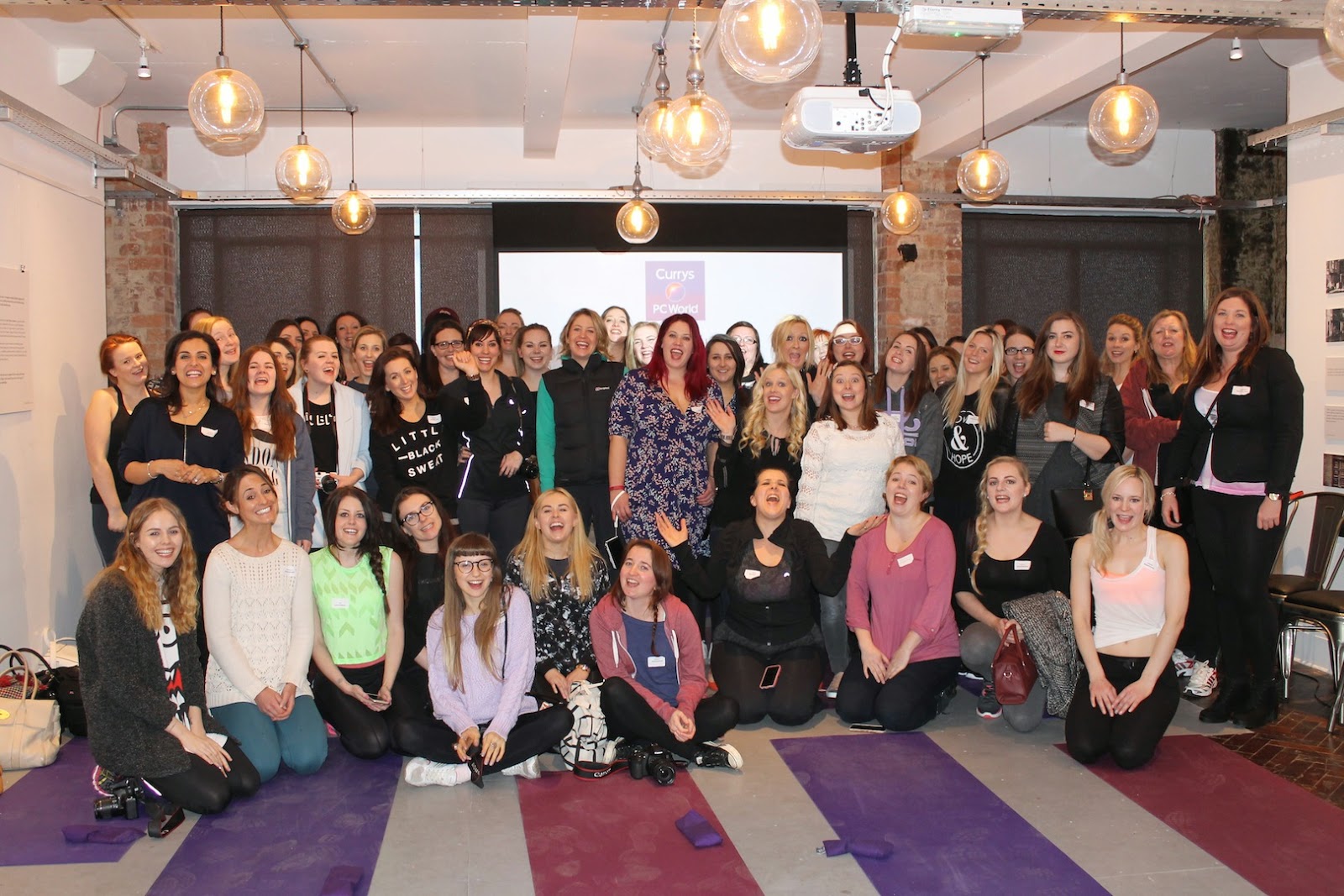 I really wish there is more events like this one. It was
fun, we’ve learnt about healthy juicing and the push to exercise proved to be
very useful.
I went back home to visit my family and since I haven’t seen them during
Christmas, I decided to update their juicer to a newer version and ordered them Philips HR1871/70 – as I own one myself and I’m very happy with it. I’m sure it will be put to a good use as they love healthy living, healthy food and plenty of exercise. Now my mum has been whatsapping me ever since then, sending me pictures of the juices she’s made.

All product selections, opinions, endorsements and styling choices are 100% my own and 100% genuine. Mode-Lily site is also a member of several affiliate networks which means that I may make a commission on clicks and purchases from some links contained on this site and related social media platforms (including Instagram, Twitter, Facebook and Pinterest). All photos, unless otherwise credited, were taken by the owner of this blog and are the owner's sole property. Should you wish to use them, please contact the owner at modelilyuk@gmail.com and link back to this site, providing the appropriate credit. To the best of my ability, every image on this blog that is not the work of the owner has been properly credited and linked back to the original owner. Please email modelilyuk@gmail.com if it appears any image has not been properly credited and it will be fixed immediately.
×